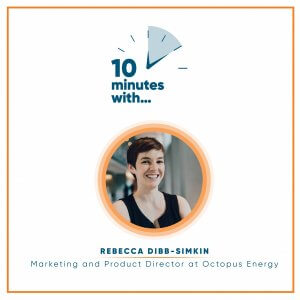 Today, we’re joined by Rebecca Dibb-Simkin, Marketing and Product Director at multi-award-winning supplier Octopus Energy. She works with a team of marketers, designers, and front-end developers to redefine what is possible for consumers and the UK energy system by using technology, data, and great people to deliver the best products and experience.

Her work has been central to Octopus’ success as a new type of energy provider. Its 100% renewable electricity, digital-first approach and in-house technology have not just won over 1.3 million customers in four years, it’s powered the company’s expansion into Australia and Germany. Octopus is also the only provider to be awarded Which?’s recommended energy supplier for the third year in a row.

Rebecca was previously Head of Product at IOT company Hive, supporting its growth as a smart home provider.

Rebecca, can you please describe what you do in a sentence?

“I look after product and proposition development, marketing, communications and PR for Octopus Energy.”

Why does Octopus Energy exist?

When did you know that Octopus Energy had made it?

“I don’t think we’ve made it yet! I don’t think you should ever have a line in the sand that says: “that’s it” because we want to get greener and cheaper energy to as many people as possible.

“We recently reached the 1.3m customer’s milestone, which is pretty exciting! That means we supply well over a million households across the UK as well as 10,000 business customers. But the sky’s the limit for our growth plans.”

“Yes, last year was full of exciting, rapid growth. We completed five acquisitions, including Co-Op Energy, and we’re continuing at full pelt in 2020 too. In January we acquired Engie’s UK retail customers.

“We’ve earned a lot of new customers organically as well – whether that’s word of mouth, seeing our top ratings from Which? and uSwitch, or our very competitive pricing.”

Octopus is clearly a very fast-growing company. I’d be interested to know, who is the one person who’s helped you the most in your journey as a businessperson?

“I think a lot of it is the support you get outside of work. My other half has always been amazing at enabling me to do what I do.”

Full disclaimer: Rebecca and I work together, so I feel like I may know the answer to this question. How many hours sleep do you get a night?

“I have two children, so more than four hours is OK and functional. Five hours is pretty good, six hours is normal. It’s usually six hours as my children are a little bit older now.  Alas as I’m nearly 9 months pregnant, I’m expecting to be getting a little less sleep shortly.”

That is admirable! How do you manage your time?

“Well, I really enjoy what I do and I’ve always loved working – so it suits me when the two worlds are fluid.

“I’m not the kind of person who has a clear binary between the office and home – and enjoys separating the two. I’m lucky to work for a company that’s fluid and flexible. If I need to go to a school event or pick my kids up then I have the opportunity to work in the evening if I need to pick anything up.

“Life is life – and it’s not always divided into work and home, and the two can slide around each other.”

I fully agree. And in terms of “life is life”, what do you like to do in your spare time? Does it inform the way you work at all?

“I like spending time with my kids. I genuinely find them pretty enjoyable! I do a lot of kickboxing – several times a week when I can. I love it for exercise and the social aspect.

“That’s what takes up the majority of my time: kids and kickboxing.”

The two Ks! What would you say has been the biggest mistake in your career?

“I think you’ve got to own your decisions, so I don’t think it’s valuable to look back on things and say, “I wouldn’t or shouldn’t have done that.”

“It’s important to be brave and take big steps forward. I was proud of myself when I made the move from big corporate life to a start-up nearly four years ago. Octopus Energy is a very different place to where I worked before. I’d previously stuck with the security of a corporate – not for too long, and they were a great place to be – but it can be tempting to stick to what you know.”

Are you able to share some details on where you were previously?

“I started my career in advertising at the Ogilvy Group and moved to Centrica. I was in British Gas residential, British Gas services, the Dyno Rod business, as well as brand jobs – and then I moved to the Hive business into more of a product role.

“Centrica was a great place to work because every couple of years allowed me to move into a different specialism. But it was a little too safe and secure, so it was time to move on.”

What is your one piece for advice for someone entering the business?

“We talk here at Octopus about recruiting brilliant generalists, or T-shaped generalists. Most people in my Marketing team are multi-skilled so we’re able to do all creative – design and development in house.   We even buy our own media.

“Everyone has a specialism – if you’re a coder, you’re a coder – but I love to work with people who can support across the board. That means they have a particular skill as well as an ability to adapt and work on other things. I’d recommend other people try this approach: it makes you well-rounded and allows you to build on other parts of your business understanding.”

I think that’s very good advice. What would you say is the one thing that sets you apart from other people?

“That’s a tricky one! I think everybody’s got their own differences and their own things that make them special. I’m the only mum my kids have got so for them, I’m pretty special and that’s enough for me.”

That’s so lovely! And going from really lovely to a bit silly… the last question is: what’s your party trick?

“I can round kick people in the head. Not in meetings, although sometimes it’s a bit tempting. I can juggle as well. I think I’ve probably juggled in a meeting in my time!”

To listen to more episodes of Ten minutes with… click here. Project management platforms that will transform your business